While we were staying near Playa Bejuco over the week of Christmas with the fam, we all decided to make the one hour drive and enjoy a day in Parque Nacional Manuel Antonio (Manuel Antonio National Park), an extremely popular tourist destination in Costa Rica for lots of good reasons.

It’s actually the smallest national park in the country, but the most visited due to its beautiful white sand beaches and abundant wildlife that is often easy to spot. In fact, some of the monkeys are known for steeling bags and opening backpacks to get to the snacks which we saw happen. Apparently, Pringle cans are banned as the monkeys know what they contain and the park is trying to ensure that the monkeys stick to their normal diet. The park is located two hours from San José on the Pacific Coast just south of the town of Quepos.

We opted to forego a local guide (we’d been here in January and discovered that as the park is so popular, there are large guided groups stopping everywhere to look at something), though they do often have a spotting scope which is very helpful because so it’s much easier to see the sloths and monkeys that are high up in the trees.

We walked to one of the four beaches in the park, Manuel Antonio Beach (also the most popular as it’s good for swimming and closest to the entrance), and spent some time relaxing on the beach and swimming. Oscar just learned to swim that week in the pool without any type of float or life jacket and he did an awesome job practicing in the ocean here with Uncle Keith, Auntie Annie and Grandpa. A couple of us also checked out Espadilla Sur Beach which is just behind Manuel Antonio Beach and much less busy. There are also other trails in the park which you can hike to see a waterfall and at least one of the other beaches, but we’ve yet to check them out (the heat and humidity and two little ones makes that tricky). 🙂

As far as wildlife, we saw lots of seemingly fearless capuchin monkeys, a couple of sloths,  two chestnut-mandibled toucans, parrots, red land crabs and Oscar found an interesting salamander-type animal on the edge of the path. We even saw one sloth moving from one tree to another right next to the path near the entrance and quite low to the ground so that was very special. And Oscar was happy to discover his favorite monkey, cute little squirrel monkeys, on our walk back to the car outside of the park.

After enjoying our time in sun, we headed back but had to make a pit stop and enjoy some cool ‘pipa fría’ (cold coconut water) sold at many of the stands just outside the park, It was SO refreshing after the being in the sun for so long! 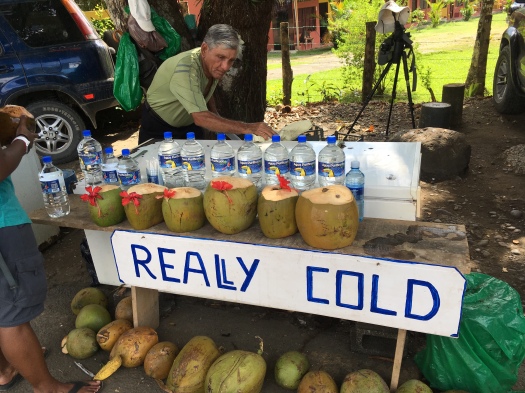 We then headed to El Avión, a cool restaurant built around a C-123 Fairchild cargo plane with amazing ocean views, for a well deserved lunch before heading back to our oasis up the coast.

Our family’s year (or more?) of adventure, discovery and learning in Costa Rica!