Let’s be honest, not many people go to Costa Rica to hang out in Liberia, but it actually has an interesting history. It was once part of Nicaragua, has been nicknamed the “White City” for its historic whitewashed colonial homes and is capital of the province of Guanacaste, land of sabaneros (cowboys), beaches and volcanos. However, as it contains the country’s second international airport, it’s mostly known as a jumping off point to discover the other parts of the province, especially the beautiful beaches of the Nicoya peninsula (Playa Tamarindo, Playa del Coco, Playa Hermosa, etc.) less than an hour away.

But, let me tell you, it’s actually a pretty cool ‘real’ Tico town with few tourists and a bit of a Wild West flavor. We spent a couple nights in the area in order to visit Nicaragua and renew our visas, but also to explore Liberia and nearby Rincón de la Vieja National Park, an active volcano (stay tuned for next post)!

There’s not a ton to do there, but it’s definitely worth a stop as there are some historic colonial homes from the 1800s along Calle Real, a lovely main plaza and a modern church (which wasn’t my cup of tea, architecturally speaking, but hey, to each their own). 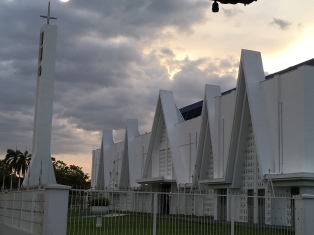 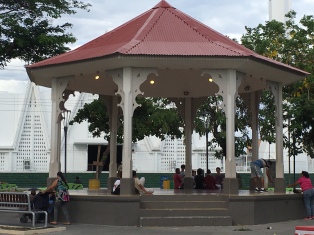 My highlight was visiting la Ermita de la Agonía, Liberia’s oldest church built in the mid-19th century. It’s a beautiful colonial church constructed of adobe and wooden beams, and there was a wedding going on when we stopped by so we were able to take a peak inside.

Of course, we have to find a playground in every city to let off some steam and right next to la Agonía is a nice park with playground that we enjoyed multiple times. 🙂 This one even had ariel acrobats practicing on their silk fabric which they had hung from the huge trees as well as jugglers. It was like a two for one deal…circus show + playground. Score! 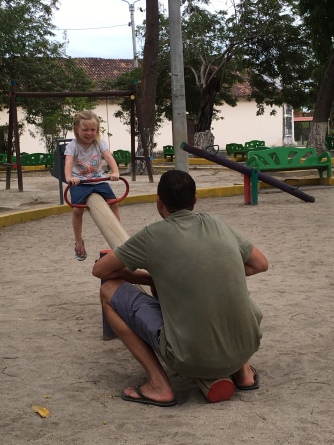 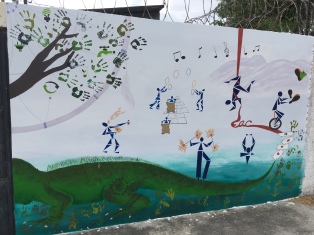 Liberia also offers the Museo de Guanacaste, set in an imposing fortress like structure which was used as a jail currently undergoing a renovation, as well as the Museo del Sabanero (Cowboy Museum) which was unfortunately closed when we wanted to check it out. 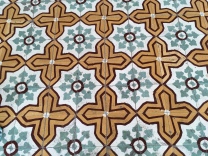 As far as food goes, there is a sushi restaurant there. Yes SUSHI! It’s called Sushi To Go and we had to try out as we haven’t had sushi since we arrived. I know…the things we’ve sacrificed! Ha! Palmer and I tried to temper our enthusiasm and keep expectations in check (we even hauled out the iPad and iPhone for the kids…we weren’t going to let anything stop us from enjoying this meal), but we were pleasantly surprised how awesome it was. Good service and delicious sushi! So, if you’re ever in Liberia and need a sushi fix, check out Sushi To Go!

I’m sure Liberia will soon be on the tourist map as it has all the makings of a great destination – rich cultural history, pleasant main plaza and modern church along with the historic La Agonía and a couple of unique museums…oh, and don’t forget sushi! What more could one want?

Our family’s year (or more?) of adventure, discovery and learning in Costa Rica!